I had to see a couple of clients on the Goldie one beautiful autumn day, and decided to work in a bit of research. After my experiences at Goldsteins, I knew that 'the badlands' had to have something decent to offer in the way of pies for the hungry outlaw bikie....after all, there's nothing like a couple of drive-bys, a home invasion, and a bashing or two to work up an appetite for a young bloke. But enough about my appointments.

I had been given a couple of leads by my best mate Flair. Many of you know of his work...he's the kind of bloke that can't walk down the street without a dozen people saying hello and clapping him on the back. If anyone knows the Goldie, it's him. In fact fairly recently there was a significant campaign to get him elected as mayor. Shit went viral, as they say, and he gained traction from all sorts of corners. Check this out:


Unfortunately, the pie leads he'd given me to date were crap. Sorry bro, but they were. One consisted of a series of great-looking photos from a home-made pie cart lady at a market near his home. 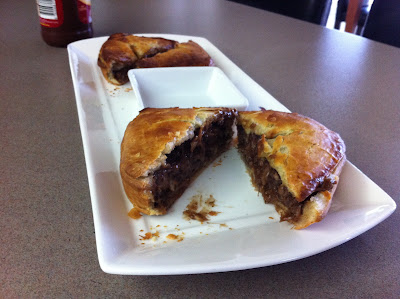 The pies looked and sounded brilliant, but the chances of me being at a local market on the Goldie on a Saturday morning? Fark-all. Usually, I'm waiting for the hangover to wane enough for me to open my eyes without stabbing pains. His other suggestion was a pie at the Anglers Arms hotel in Southport. Fine, but it was a 'pie' in a bowl with a pastry top, which we have scientifically proven through a half-arsed poll not to be a pie.

As it turns out, Flair lives within 5 minutes of one of the best pie shops  in SE Queensland, if the two I sampled are any indication...Horners Pies at Sorrento. The Sorrento shopping centre is on a devilishly busy intersection where people driving to and from Surfers meet those traveling north / south to Southport. It can be a bit tricky to get into , but is well worth the effort. 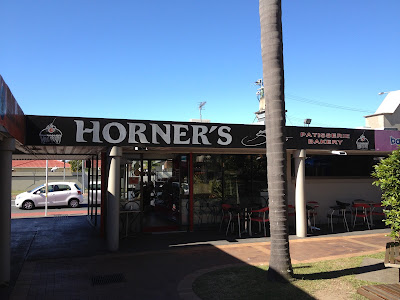 The pie warmer itself isn't the most grandiose thing you've laid eyes upon, but serves its purpose, holding a pretty good selection of (as described on the chalkboard) standard and gourmet pies. Happily, the gourmet pies were of a largish standard size, and were reasonably priced, in the mid-$5 range. My choices on the day were a beef and Guinness, and, joy of joys, a Sri Lankan lamb curry.

The pastry was flaky, golden, and well cooked top and bottom (see pic). 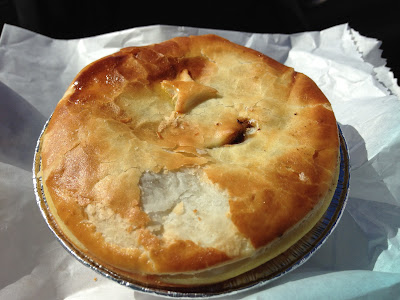 The beef & Guinness was tasty, tender, and swimming in a rich and flavoursome gravy that one would expect to receive at an Irish pub. The gravy had a slight sheen to it that suggested gelatin, but old man Horner managed to strike the right balance of consistency and moistness resulting in a really good pie. Score is a very solid 8/10, taking into account the perfect temperature and value for money.

The Sri Lankan curry. What can I say about this? Well, if you're on the Coast, this is probably about as close to the Rock N Roll lamb curry pie as you'll find. I'm not saying its a perfect '10' (the pastry being the main difference), but I'm happy to give this gem a solid 9/10. The generous chunks of lamb were perfect, and the flavour of the gravy and temperature were spot on. Some people may be put off by the inclusion of rice in the filling (that's cheating, I hear you cry), but I didn't mind it, and if anything it lent a certain degree of authenticity to the premise that you're eating something that could easily be served to you in an Indian / Sri Lankan restaurant (if there is such a thing as a Sri Lankan restaurant). 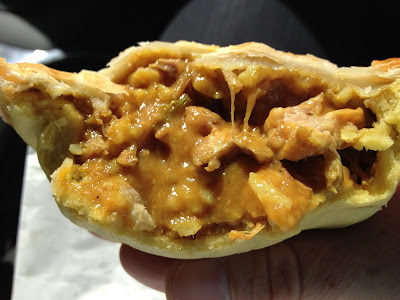 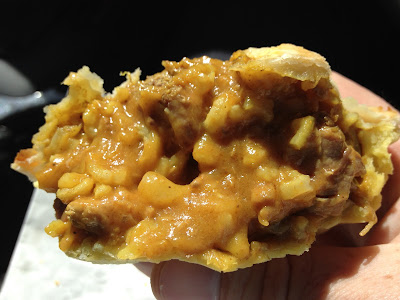 It made me very keen to return and try some of their other offerings. Stay tuned. And that's about it for this week. I hope that everyone has a good long weekend, and that the Wallabies can lift from what they showed us (or didn't show us) during the week.

Lastly, if you have a Twitter account, you can follow me @thepieologist (the feed updates at the top of this blog also, so don't fret if you're stuck in the 90's like Ed; you won't miss out). But the heirarchy at Twitter have requested that you don't all rush on there at once to follow me, as they don't want the tsunami of pie lovers to crash their servers. :D

Family - Supposedly feeds a family. Can actually feed one moderately hungry man, with room for dessert.

Large - An oversized regular pie; without being deemed big enough to feed an aforementioned 'family'. Becomes a formidable beast when combined with a serve of mushy peas.

Standard - Your regular garden variety bakery pie. Eating two is never a problem for most.

Gourmet - Pronounced Gorm-ett. Usually smaller than a Standard, more expensive, and prettier. Often filled with game and served on a white plate alongside a Greek salad. The miniature poodle of pies.

Party - Blokes finger food. To be consumed en masse with beer at parties, and at your mate's place in front of the footy.

Pieologist
I’m a man who likes pies….a lot. My favourite pie is a curry pie: beef, chicken, lamb, kangaroo, Indian, Thai, Sri Lankan – I don’t care, just as long as it’s not a vegetable pie, I'm happy. The moniker of Pieologist isn’t self-appointed; it was bestowed upon me by a learned colleague who shall remain nameless (you know who you are). I don’t claim to be a professional food critic – but Christ I’m enthusiastic. I’m on a mission to find the perfect pie. This blog is partly to keep track of where I’ve been, partly as a community service (hey, we’re all doing what we can, right?), and mostly because of peer group pressure. Hope you enjoy it.